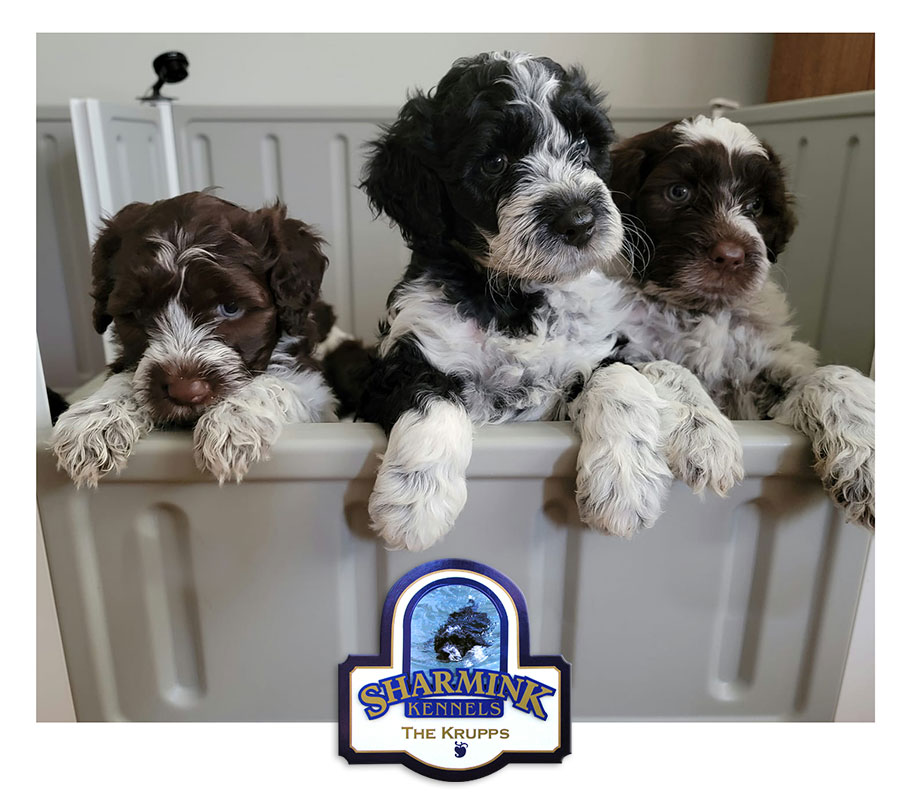 A photo was added to the gallery. Click HERE to see it.

Two videos were added to that page. Click HERE to see them.

I was the owner and breeder of Chows from 1970 until 2000, I successfully showed and got championships for at least 35 of the Chows I owned. I always maintained a small kennel with no more than 6 dogs at one time, as I felt I could give more time to each dog.

My husband and I bought a retirement home with 8 acres on the Mira River in Cape Breton Island, Nova Scotia, where I was born. We wanted a breed that loves the water and boating, as we both love doing this. I was trying to decide which breed would suit us best, when I discovered the Portuguese water dog. I was at a dog show when I saw this beautiful dog being shown. I fell in love with his personality and looks. After researching the breed for 2 years we decided, yes, this is the breed we were looking for. I bought my first female, Maggie, a wavy black with some white, Porty, and brought her home. I fell in love with her. Maggie got us hooked on the Portuguese. We took her to Cape Breton with us, and she immediately took to the water. I think it was the best summer we had in Cape Breton, as Maggie kept us laughing all the time.

We decided Maggie needed a friend, so we bought Molly. She is a black and white wavy. Maggie loves her as if Molly was her own pup. We lived on a canal in Lancaster, Ontario, and Maggie would dive into the canal and catch fish for Molly to eat. Molly, of course, is as much fun as Maggie. They are devoted to each other.

After doing the health clearances on Maggie, we decided to breed her. We found a handsome male for her. Louise Turcotte, the owner of Ch. Scrimshow's Chester of Lolika, met my husband and me and Maggie. She fell in love with Maggie, and approved the breeding with her handsome boy. Chester is a very gentle, sweet dog. He is a black curly. Chester, of course, also has his health clearances. Chester and Maggie loved each other on sight, so the breeding was successful. We had our first litter in April of 2001. This is a wonderful breed. They are a lot more active than my chows, and are so much fun!!!

HISTORY OF THE PORTUGUESE WATER DOG

Origin and Purpose
For centuries, this seafaring breed existed everywhere along the coast of Portugal and is considered a purely Portuguese breed. Owing to modifications in the fishing systems used, the breed has become restricted to the province of Algarve which should be considered its home. It was prized by fishermen for its spirited yet obedient nature and a robust, medium build that allowed for a full day’s work in and out of the water. The Portuguese Water Dog is an athletic swimmer and diver of exceptional ability and stamina. He aided his master at sea by retrieving gear and broken nets, herding schools of fish and carrying messages between boats and to the shore.

General Appearance
The Portuguese Water Dog is defined by his job. He has a hard, penetrating and attentive expression, splendid sight and a fair nose. Slightly longer than tall, he is a medium-sized, sturdy, athletic swimming dog with webbed feet, short neck, and a wavy or curly coat to protect him from the elements, whether in the water or on land. From his impressive head with piercing gaze through a rugged body to his powerful tail carried up in a ring with its characteristic flowing flag, he presents an indelible impression of strength, spirit and soundness.

Temperament
An animal of spirited disposition he is self-willed, brave and very resistant to fatigue. Exceptionally intelligent and a loyal companion, he does his job with facility and obvious pleasure.